Sometimes I forget just how important it is to acknowledge when you’re happy. The act of noticing it and pointing it out can even make you happier. You may look a bit of a fool because of it, but who cares! You’re happy right? So in acknowledgement that I am happy, even if just a little, I’m writing about it. Especially since today I was told by three places I applied at (one of which the pre-interview went so well that the woman made it seem as though I would certainly get an interview, if not the position) that I wouldn’t even be receiving an opportunity to interview.

Ten things that make me happy (in no particular order):
Seeing the colours red and purple anywhere, especially when they are paired together
My books
My friends
Cooking for others
Movie nights
Origami dragons
Knitting and crocheting, especially nerdy items
Hugging my family members (Okay, just my family members in general)
My stuffed animals
Encouragement from anyone to keep writing and pursuing my dreams

I know some of these may seem incredibly trivial; however, each one holds its own importance to me, whether it’s silly or not.

I might as well go in order when explaining my choices. So here goes…

Seeing the colours red and purple: I’ve dealt with a lot in my life over the last few years, and a lot of that has been my trying to figure out who I am as an individual. Growing up, I copied my sister Kelly in everything. I didn’t really intend to, but she would say how much she liked something, and then I’d realise how much I liked it as well. This was especially noticeable in our choices of favourite colours. So when I finally realised that I had my own favourite colours and that they were two colours I had never expected, I was elated. I was in France for a three-month internship, and one morning I had the realisation that there were two colours that never failed to make me happy: red and purple. So these colours remind me that it’s okay to still be figuring out who I am, because that will be a lifelong journey. 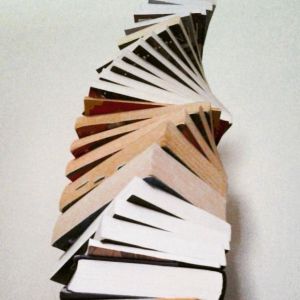 My books: Well, I think this is pretty obvious. But aside from the glaringly blatant, my books have helped me become who I am. They’ve helped me feel proud to be super studious, like Hermione. To be aware of how much I have (and can) change and grow as a person, like Neville. To see the possibility of power in and hope given by stories, like Marjan’s and Shahrazad’s. To seek the truth even when it hurts, like Atticus. To be wary and also excited to go on adventures, like Arthur Dent. To remember that even though life is short, it can create a lasting impact, like Esther Grace Earl’s.

My friends: Now this one just plain needs no explanation.

Cooking for others: I’m so tempted to say “cooking with others,” but so many friends of mine can attest to the fact that I’m not good at cooking with people—I just kind of take over. I do love cooking for people though. I love having a friend of two over and making an evening out of it. They get to keep me company while I am toiling over the food, and I get to make them something to eat. No matter how simple or complex the meal is, I always have a blast. Plus, we usually follow it up with a movie and games.

Movie nights: This became a tradition for me in university. For my last two and a half years of school, I would have movie nights. A friend and I would plan the event by choosing a movie, spreading the word, sometimes creating an event on Facebook, and signing everyone into the dorms. This happened once a week, on average. It was my main social time, and I loved it. It would almost always start off about 15 minutes late, and end with us falling asleep on each others shoulders or talking until curfew. These nights hold some of my fondest memories of school, and I’m so happy that some of my friends have continued the tradition as best as they can.

Origami dragons: Okay. Long story short, I used to be super into origami. After the phase passed, I kept making tulips, hearts, and cranes. Then one day, Carrie Hope Fletcher mentioned that she always carries around origami paper so that she can make little dragons when she has a few minutes of downtime. Her mentioning that made me think of all the origami I used to do and wonder if I could successfully make a dragon. So I tried. And now I have well over 200 origami dragons. They were calming to make, are bright and colourful, and will soon be used as decoration for a very anticipated (at least by me) reading nook. They not only make me happy and proud, but they remind me of Carrie’s videos and her advice to always stay hopeful and positive.

Knitting and crocheting: Now this is something that my grandmother had tried to teach me to do for years, but I could never get the hang of it. Then, I made a friend who makes amigurumi. I liked them so much that I asked if she could teach me. After a few weeks of pure frustration, I started to get the hang of it. Then the next year I stayed in school by raising over $500 selling the stuff I was making. Now it’s something I enjoy and usually find incredibly relaxing. Plus, I designed a Hufflepuff-themed blanket that I’m knitting for my reading nook.

Hugging my family members: Okay. So as I said, I love my family in general. But they give the best hugs—no joke. They are the tightest, warmest, silliest hugs. Whenever I get overwhelmed or hurt, find myself sad or frustrated, or have a meltdown from my anxiety, my first desire is to get hugs from each person in my family. Sadly, that’s impossible, as we live nowhere near each other (currently Missouri, Arkansas, Florida, and Mexico). But I can still turn to them whenever I’m struggling or in trouble, and they’ll do anything and everything they can.

My stuffed animals: I only have four: Daisy, a little (kind of creepy) doll that Kelly made me when we were little that I love to pieces, sometimes literally; Lily, a little green rabbit that Shawn gave me during our last Easter with our family together; a nameless purple elephant that’s shaped more like a ball than an elephant that I’ve always found beyond adorable; and Mandi, a big rabbit that was given to me by Miss Karen when she heard that one of my closest friends had died. Miss Karen spent an entire afternoon driving all over town trying to find the same rabbit that she had given my friend, Mandi, a couple weeks before she passed. Mandi liked it so much that she asked to have it buried with her. Miss Karen left it with a wonderful note and a few small treats in front of my dorm room on one of the most difficult days of my life. I’ll always be thankful for that gesture of kindness and love.

Encouragement: This one probably seems like a given. But having both general and social anxiety disorders can cause every day, every thought, and every ambition to seem worthless and terrifying. Every little bit of encouragement I receive helps me to face the next moment with more hope, and I don’t know how I’d get by without the support from my friends, family, acquaintances, and the occasional strangers. So thank you, everyone, for your support. I love you and hope the best for your lives.

What makes you happy? I’d like to hear about it down in the comments!

2 thoughts on “What Makes Me Happy”